Ladies, can we have a brief heart to heart talk? I know you’ve been dating him for a while now. You love him so much but doesn’t get as much love in returns. It might be some signs he is not into you.

Every time you keep asking yourself the things you are doing wrong that made him love you less. He shows less concern about anything that has to do with you. It was not how he treated you when you first met him. Why did he change completely? So many questions running in your head, but you can’t answer any. The truth is, you are the one who is genuinely into him. He showed you little love, and you fell for his look; he is damn handsome, tall, loaded with six-packs, thick, fair, and financially ok.

At some point, he has forgotten all your pet names, struggles to call or send a text. Unlike the person you once know, even if you summon the courage to call, he is sounding weak and not in the mode to hold any conversation with you. He makes the whole conversation looks as if you are wasting your time calling him. You disagree with how he treats you but still can’t summon the courage to break up with him.

I understand He has all the potentials you want in a man, but the only disturbing issue is that he drives you insane with his attitude towards you. If this is you, I think you should read this article to the end. It will enlighten you on the obvious signs he’s not into you.

How do you know he is not into you?

There is no emotional torture in the world of dating other than being in a relationship with a guy who seems to be very interested at the beginning of the relationship, but deep within, he is not. From the onset, he treats you like a queen to create a beautiful memory. But later on, he changed completely. Please don’t say it’s all your fault or there is something you are doing wrong. If he genuinely loves you, he will tell you when he notices something in you that displeases him. I think he’s not into you. See more of the apparent signs below.

Communication is one prominent aspect of all relationship. When a guy is into you, he calls more often than expected. He wants to hear your voice to know if you are ok. But the reverse is what you should expect when a guy is not into you. If your guy doesn’t call you consistently, and he never initiates a conversation, this is the first sign he’s not into you.

Ladies are naturally interested in a guy who flirt. You feel good talking with him because he is the lady’s man. It can raise the hope that you will make him feel good too. You have to ask yourself if he is flirting with you. It is a great sign when a guy is not that into you. If he is feeling the same way you do, then he’s going to make a move. 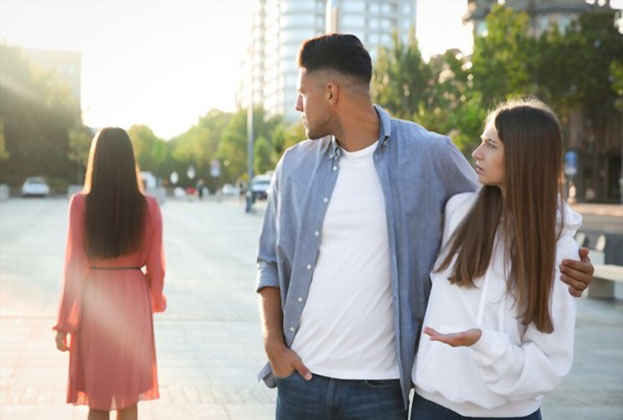 A guy who flirts is always bold to approach any lady. He’s ready to go after anything he wants. So, if you think he is into you with his kind gestures without making any move, be rest assured he is flirting with you. He can flirt with anyone, including your friends. It’s an obvious sign he is not into you.

When a guy is into you, he becomes super sensitive to competition from other guys. I’m not saying be will try to threaten or fight guys who come around. But when a guy is interested in you, he will pay close attention each time you mention other guys in your discussion.

When you are into a guy who feels so confident mention other ladies he’s friends with, please pay close attention to be sure he is not having an affair with them.

Let’s say you are on a casual date with him and want to know if he’s not into you or wants something more than just friends. Watch the way he reacts when you discuss plans with your male friends. His attitude will be enough to show if he has a crush on you the same way you do. If he instantly turns to you and starts asking different questions, it’s a clear indication he’s jealous and probably into you.

It is another significant sign to look out for. If a guy spends less time with you, even when he is not running a busy schedule, he probably may be spending his time flitting around other girls. When a guy is into you, he reschedules his busy calendar to have some good time with you. It shows he is excited with so many positive feelings when he spends time with you.

When he is not into you, he becomes too busy to have you around or visit you and see it as usual. Sometimes he might be insanely busy with work and other things in his life. He may be trying his best to see you, but there is just too much other stuff going on. He will still keep close communication with you with valid reasons of being away in such a situation. If he doesn’t have serious reasons for staying away from you, the simple answer is that he is not into you.

This sign is a clear indication that you’re a casual friend to him and not a potential girlfriend. No guy will dare to ask or seek advice on a love affair with other women from a lady he is seriously into.

It is a clear indication he is not that into you. All he wants from you is a close friend who will educate him on a different woman’s perspective rather than someone he wants to date.

Discussing such issues with you shows he is more serious about them than he is with you. Please don’t try to force a future with him.

If your gut is telling you, he doesn’t care about you, and you don’t see a future with him. Then stop allowing him to flirt with you. Find a guy who’s into you, someone interested in you the way you want to be with him. Most times, you don’t need to start blaming yourself or believe all his explanations. Just admit the signs he is not into you and move on.

Husband care during pregnancy – Taking care of your pregnant wife

5 Obvious signs he is not into you

Planning the best honeymoon destination in the world

How to book Vegas Hotel without resort fee

How to tell if your husband wants a divorce